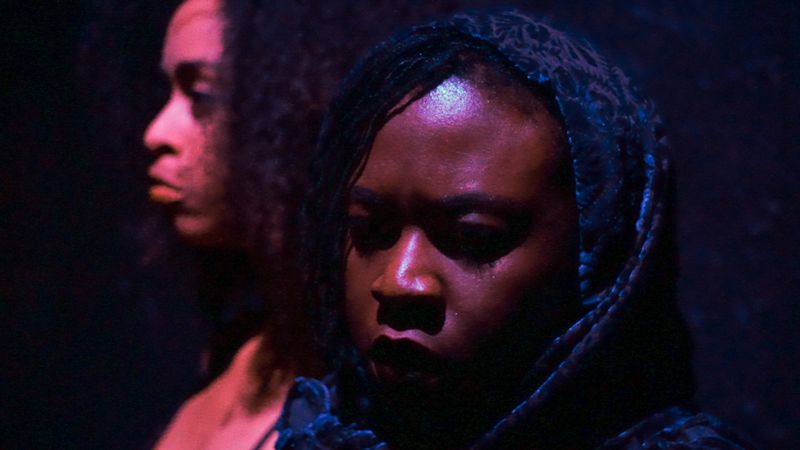 Tyree Marshall as Ethel May, and Dee Dee Stephens as Gonee (Zach Davidson)

A radically revisionist “Antigone” made in the Black Lives Matter era seems the ideal vehicle to launch us into Black History Month and lead our weekly look at L.A.’s theater scene. Other picks include the Actors’ Gang production of “ Accidental Death of an Anarchist” by Dario Fo and the Matrix Theatre’s guest production of “Two Trains Running” by August Wilson — two master craftsmen operating from opposite ends of the theatrical spectrum — plus the prickly romance that is “Heisenberg.”

‘Love Is Another Country’ at VS.

The essentials: Gonee (Dee Dee Stephens), a highly educated African American woman, is driven to the edge of sanity by the death of her brother, left lying on the ground for hours by the police who apparently killed him. When Gonee shoots a policeman in a maddened rage, she is imprisoned with no hope of release. Visitors during her confinement include her deceased great-grandmother Ethel May (Tyree Marshall) and her sister Nene (Celia Mandela Rivera), incorporeal presences whose conversations with Gonee contribute to the hallucinatory atmosphere.

Why this? Lisa Marie Rollins’ nonlinear sampling of Sophocles’ “Antigone” is a racially charged feminist parable. A co-production of the well-established VS. Theatre and the emerging company Coin & Ghost, which is dedicated to “remixed mythologies,” this four-person world premiere blends mysticism, ritual and the supernatural into a drama that emphasizes the plight of African American women in an unjust justice system. Director Kendall Johnson was drawn to what he called “women who are left behind after a tragic encounter with the state.”