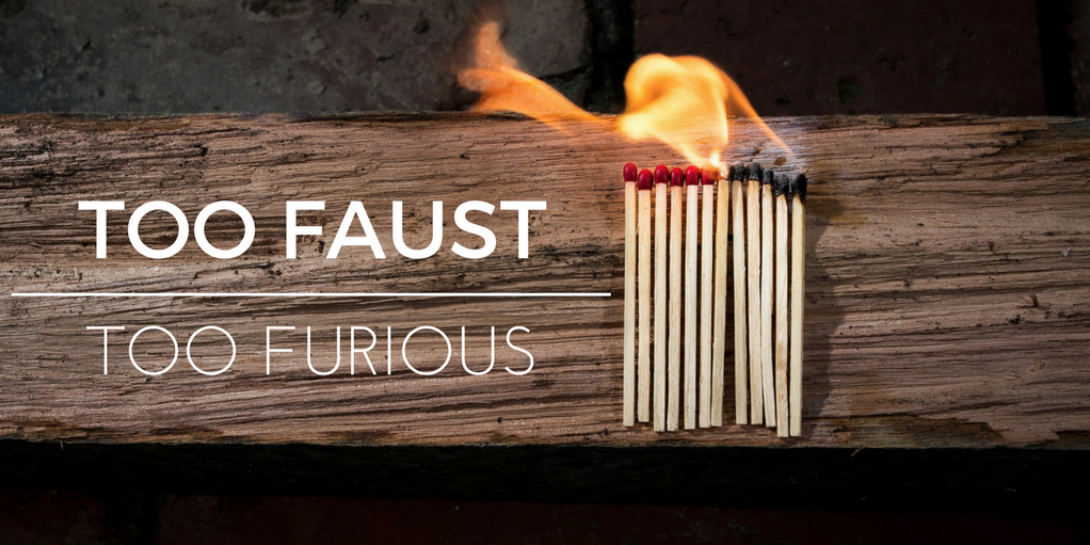 “TOO FAUST, TOO FURIOUS”

The German legend of “Faust” centers on a successful (yet dissatisfied) scholar who makes a pact with the devil: his eternal soul in exchange for unlimited knowledge and worldly pleasures. From Christopher Marlowe to David Mamet, writers have been spinning their own “Faust” stories for centuries. The legend has become more than a cultural icon; it has become a trope, used to explain both supernatural skill (see: Robert Johnson) and suspicious collaboration (see: Rudolf Kastner and Adolf Eichmann).

In the Fall of 2017, COIN & GHOST (using supernatural skill and suspicious collaboration) will present a highly original, wild remix of the classic. The show is called “Too Faust, Too Furious,” and it is indeed both of those things.

Set in New Orleans after the Vietnam war, “Too Faust” is a physical whirlwind, a collage, an engineering marvel (both literally and figuratively), and a living conundrum. It features dance battles, heavy drinking, witchcraft, and original blues music, leaning as heavily into heightened poetry as it does into lowbrow clown. This project, born out of collective mythology and collaboratively created by the ensemble of artists, hangs neatly in-between a dynamic world of movement (from raw and experimental to classical) and an unkempt-but-intact respect for a legendary text.

“Too Faust, Too Furious” treads the fine line between bewilderment and enlightenment.

The script, which is being written by written by playwright Cecilia Fairchild (Talking Blues, Stripping in LA), will be developed alongside the cast with a three-week workshop to kick off the rehearsal process. The show will be directed by Coin & Ghost Artistic Director, Zach Davidson. Performances will run October 20th-November 12th.

FOR THE AUDITIONS, we are asking you to prepare two things:

-One minute of memorized poetry / text that you consider “poetic”, and…

-One minute of ANYTHING YOU LIKE. This can be a monologue, a song, dance, story, rubik’s cube solution, tuba solo, magic trick, cocktail recipe, or whatever else you want to share with us. “Too Faust” will be a wild, weird, imaginative, collaboratively-built project, and we want to see what you choose to bring in. Now — whether that’s a special skill, a passion, or simply a moment of whimsy — that’s up to you.

*** There will also be a physical component to the audition, so please wear clothes you feel comfortable moving in. ***

Auditions and Callbacks will be during the day on Saturday and Sunday, August 19th and 20th.

To request an audition slot (or to formally file any questions or concerns), please email zach@coinandghost.org. We look forward to meeting you and seeing your work!

God: a busker-kid on the streets of the French Quarter. Androgynous, with the grit of a subway platform and the purity of a summer breeze. When they laugh, it sounds like bells ringing in the snow.

Mephistopheles: the Devil. He takes different forms, mostly that of a beat cop with the NOPD. He’s capable of terrible things, of course, but he also has it in him to shed a tear when God sings the blues. He is the embodiment of nuance and moral ambiguity.

Faust: a failed playwright and moderately successful theater critic just back from New York. He’s originally from Louisiana. He got drafted, and almost went to Vietnam, but he tore his ACL in boot camp and they sent him home. He went back to New York feeling like he missed out, and got more and more depressed living the life of a critic.  Now he’s back home trying to write a book about dramatic theory. A treatise on Chekhov maybe. Or Tennessee Williams. Or Eugene O’neill. Or all of them.

Valentine: Faust’s childhood friend, wears fuckin rubber boots and always has a cheek full of beech-nut and bloodshot eyes. He went to war and everyone in his platoon died. Everything he says is actually dangerous, but his manner is calm, sweet, down-home. He raises hogs in Gretna, slaughters and sells them. He’s got a little side racket making his own boudin and giving it to Buffa’s (a restaurant and bar, pronounced BOO-fuz) in the quarter, where they let him drink for free. Faust ultimately kills him in a dance battle refereed by the Devil.

Gretchen: Valentine’s sister. Lives with their mother and strips at Big Daddy’s to make enough money for them to live on. Mom doesn’t know, Val doesn’t know. They think she works late doing the books for an antiques dealer on royal street. Maybe they don’t really think that, but they’ve decided to think that. Mom is sick, medicine’s expensive, and Gretchen doesn’t mind dancing. In fact, she thinks it makes her more interesting. Her stage name is Margaret. She falls in love with Faust and has a tragic end, but she’s saved because of the purity of her heart and her hunger for redemption.

The Witch. A heart-stoppingly gorgeous drag queen who dresses like a female Johnny Cash, moves like Ursula from the Little Mermaid, and sings like Tom Waits in a church choir.

The Fates: There are three of them, and they play many roles aside from themselves – they act as buskers, barflies, strippers, and the Witchettes (the Witch’s goons and backup singers). They are extremely physical and musical in all sorts of ways – graceful and raw, beautiful and disgusting.